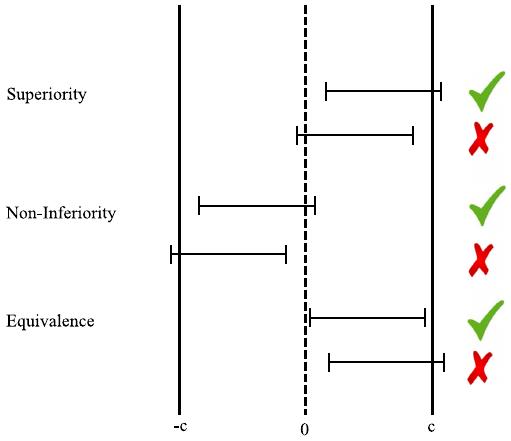 In clinical trials, study designs may focus on assessment of superiority, equivalence, or non-inferiority, of a new medicine or treatment as compared to a control. Typically, evidence in each of these paradigms is quantified with a variant of the null hypothesis significance test. A null hypothesis is assumed (null effect, inferior by a specific amount, inferior by a specific amount and superior by a specific amount, for superiority, non-inferiority, and equivalence respectively), after which the probabilities of obtaining data more extreme than those observed under these null hypotheses are quantified by p-values. Although ubiquitous in clinical testing, the null hypothesis significance test can lead to a number of difficulties in interpretation of the results of the statistical evidence. We advocate quantifying evidence instead by means of Bayes factors and highlight how these can be calculated for different types of research design. We illustrate Bayes factors in practice with reanalyses of data from existing published studies. Bayes factors for superiority, non-inferiority, and equivalence designs allow for explicit quantification of evidence in favor of the null hypothesis. They also allow for interim testing without the need to employ explicit corrections for multiple testing.