Guilt in bereavement: Its relationship with complicated grief and depression 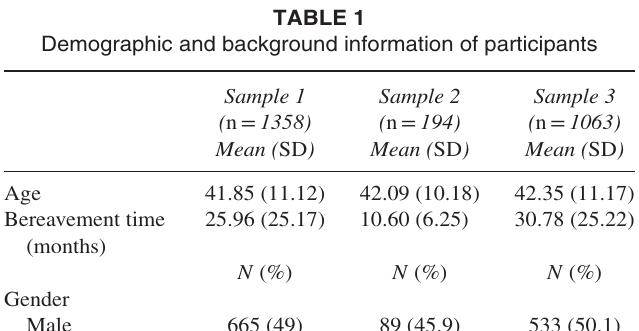 This study investigated the relationship between guilt and well-being of bereaved persons, and explored potential differences in the associations between guilt-complicated grief (CG) and guilt-depression. In total, 1358 Chinese bereaved adults were recruited to fill out questionnaires. Participants ($N = 194$) who had been bereaved within 2 years of the first survey, filled out the same questionnaires 1 year later. Higher guilt was associated with higher degrees of both CG and depression. The level of guilt predicted CG and depression symptoms 1 year later. Bereavement-related guilt has a closer association with CG than depression. Responsibility guilt, indebtedness guilt and degree of guilt feeling are more prominent aspects of guilt in CG than in depression. These findings demonstrate the significant role of guilt (perhaps a core symptom) in mental health of the bereaved, having implications for identifying persons with grief complications and depression.